The Makai board has been on display at CSM for several years. It is solid redwood, a classic Alaia shape, and its obvious age earned it a spot in the Timeline exhibit, but even its owner, Dale Smith, didn’t have much information as to its history.

Things were about to change…

Thanks to years of meticulous research, the Makai board is now believed to have been made by Duke Kahanamoku, and is thought to be the board used in Duke’s well-documented rescue off Newport Beach in 1925.

For Dale Smith the tale of the Makai board was starting to read like a classic detective story. In 1991, Dale, a former skateboard pro and amateur historian, purchased a vintage, solid redwood board for his collection. The board had been coated in years of dust and grime, and after closer examination he saw the term “Makai” had been chiseled in 3-inch letters on the upper part of the deck. 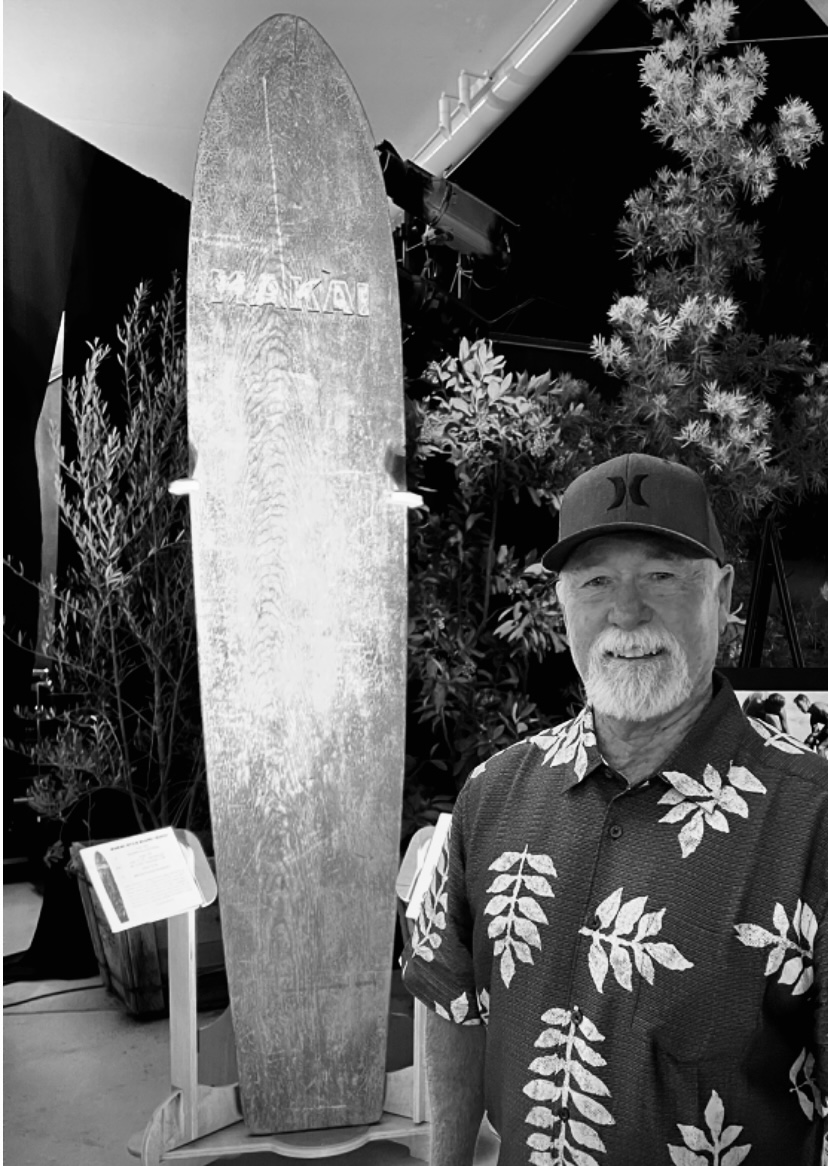 Also clearly visible was a distinctive pattern in the woodgrain itself. A few years later Dale was going through an old issue of Surfer and saw an article about Sam Reid and Tom Blake. On one of the pages there was a 1925 photograph of a young, blond Reid posing in front of a six-board line-up at the Santa Monica Swim Club. 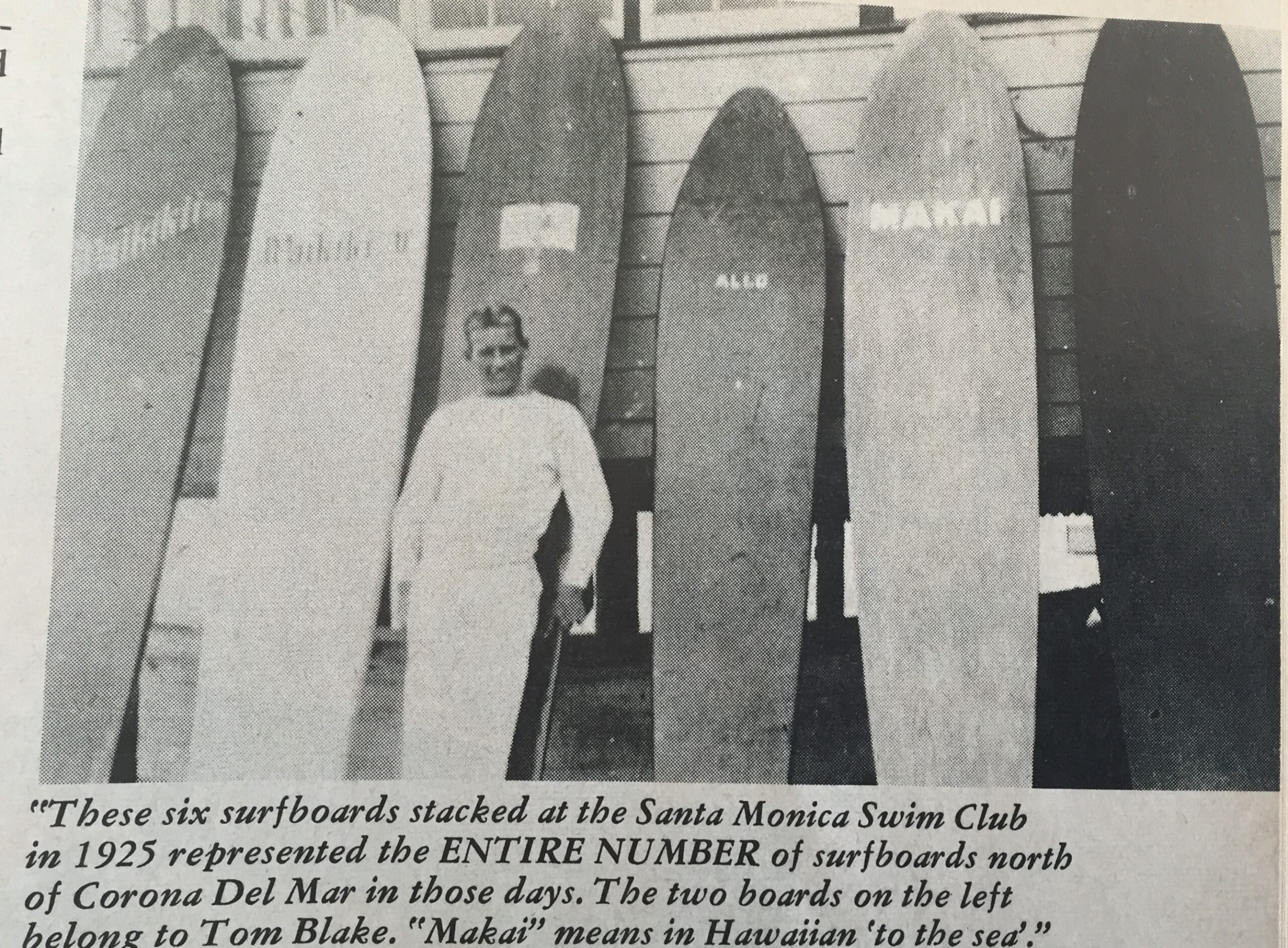 As Dale read the caption and looked closely at the photo, the term “Makai” was clearly visible on the fifth board from the left. His heart skipped a beat. The board was also the right length and shape. It was an “ah-ha” moment, to say the least.

Throwing himself into full-blown research mode, Dale discovered that Duke Kahanamoku, a close friend of both Blake and Reid, had been a lifeguard and swim coach at the Club in the early 1920s. Further research led to newspaper articles and photos of the story of Duke and his friends’ dramatic rescue of twelve crewmembers from the capsized fishing boat “Thelma.” The four used their surfboards to push through the crushing waves, and Duke was quoted as saying: “Without the boards, we probably would not have been able to get to them in time.”

Dale still does not know exactly how Makai ended up where it did, some six decades later, when he was able to purchase it. For the moment he’s actively pursuing additional clues and collecting surf history.

As part of the Makai board continuing story, Dale Smith sought out and hired Marie Ward, an expert at digital scanning, to make a complete record of his board. Thus armed with high-quality blueprints, Dale purchased several pieces of old-growth redwood and has tapped maestro Craig Hollingsworth to shape an exact replica of Makai. Said Dale: “I would like to have a number of surfers try out the replica model, just so they can see what it is like to ride a solid board from the 1920s.” It should be interesting… 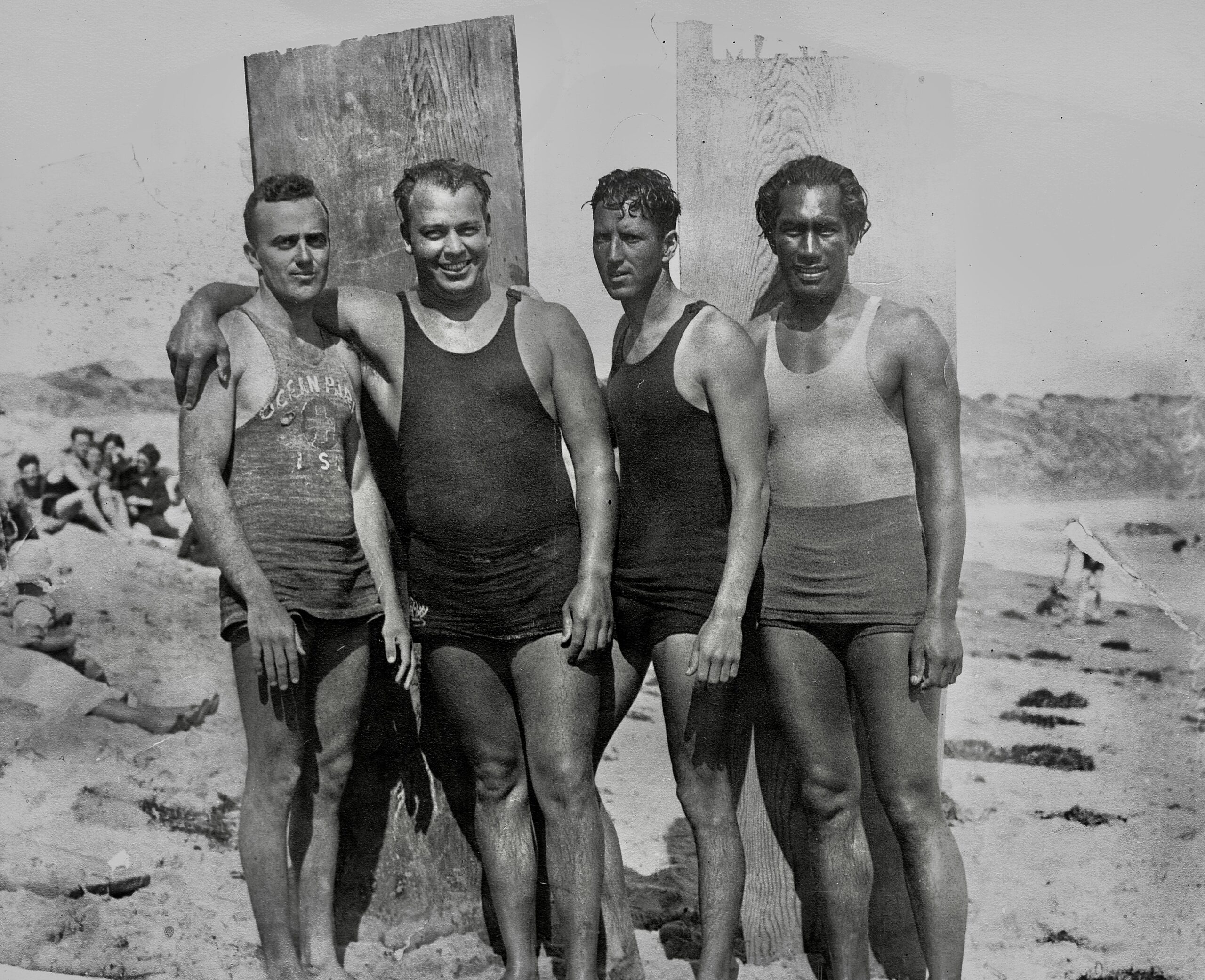 Heroes of the 1925 rescue, posing on the beach at Corona del Mar: from L- Gerald Vultee, Owen Hale, William Herwig, and Duke Kahanamoku. 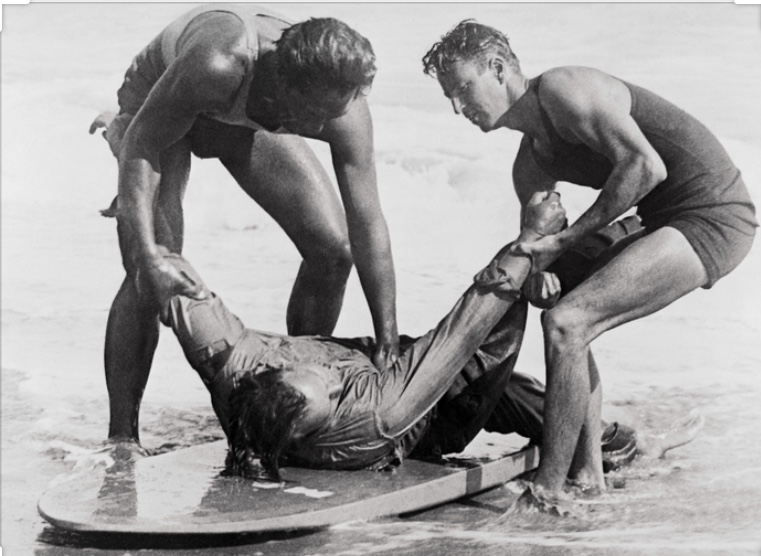 1925 Newspaper photo re-enactment of the rescue of the Thelma’s crewmembers. From L: Duke Kahanamoku, R – William Herwig, and Owen Hale posing as one of the rescued men.