By CSMIn Memoriam
No Comments

By Bob Shoecraft
Taken from Pat’s 2007 Application to the Surfer’s Walk of Fame.

My name is Pat O’Connor. I grew up in Hermosa Beach and consider it my hometown. There has always been a special place in my heart for the Hermosa Pier, perhaps even more so today. Walking the pier now, I marvel at those bronze plaques embedded in the cement, each star embossed with the name of a surfing great – Hap Jacobs, Leroy Grannis, Doc Ball, Dale Velzy, and Dewey Weber to name a few. Yet it’s so much more than admiration I feel. Those world-class surfing pioneers and legends were once my mentors, my teammates, my competitors, and my friends.

Thinking back, I realize now that we were shaping more than boards in those early years; we were shaping the sport of modern surfing. It’s hard to believe that more than sixty years have passed since I picked up my first board. The ocean is constant; time vanishes before the waves. Perhaps that’s what draws me to Hermosa Beach. To stand on the pier is to feel my heroes and mentors come alive: There’s Jim “Mother” Bailey taking off on one of those Bailey Waves now; he’s riding zero surf at the end of the old Hermosa Pier, making it clear across the wave to the Biltmore Hotel, all the way up the beach and in. 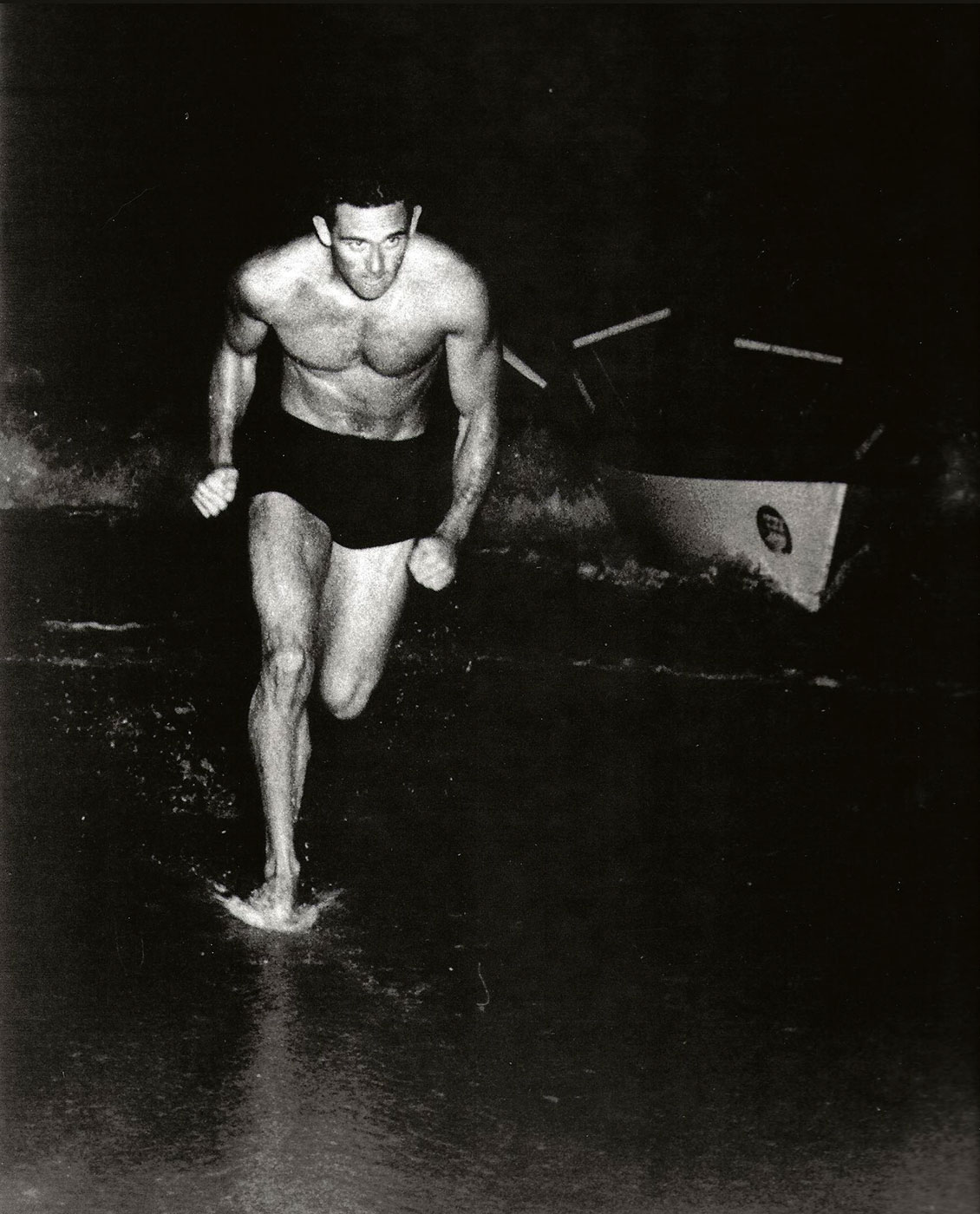 Not many can say their hometown impacted an entire surfing world. How fortunate I feel to have grown up in Hermosa Beach, a truly unique stretch of Southern California coastline. The following is my personal surfing story, one I am submitting for your consideration as a 2007 candidate for the Surfer’s Walk of Fame. It is with pride and gratitude that I present this record of my contributions to Hermosa’s surfing history.

Hermosa Beach as an Early Influence

I was eight-years-old when the O’Connor family moved to Hermosa Beach in 1937. These were the Depression years, and my Dad, Gus O’Connor, purchased two lots for $1100 on 29th Street. Our two-story house cost $11,000 to build. Gus, a Harvard Law School grad and prominent city attorney, commuted to Los Angeles every day. Still, he found time to join the school board. He and my Mother Ruth encouraged the strong ties our family soon developed to the Hermosa community. Yet not even they could have imagined how a small seaside town, one with a population of 1100, would so profoundly influence their son’s life.

When the six O’Connor children arrived on the scene, Hermosa was already a thriving beach community. Surfing was a big deal in Hermosa. To kids growing up in Hermosa, big-name surfers were every bit the heroes as more popular athletes, like Joe DiMaggio and Babe Ruth. All of us kids got involved in water sports early. We all wanted to be surfers. 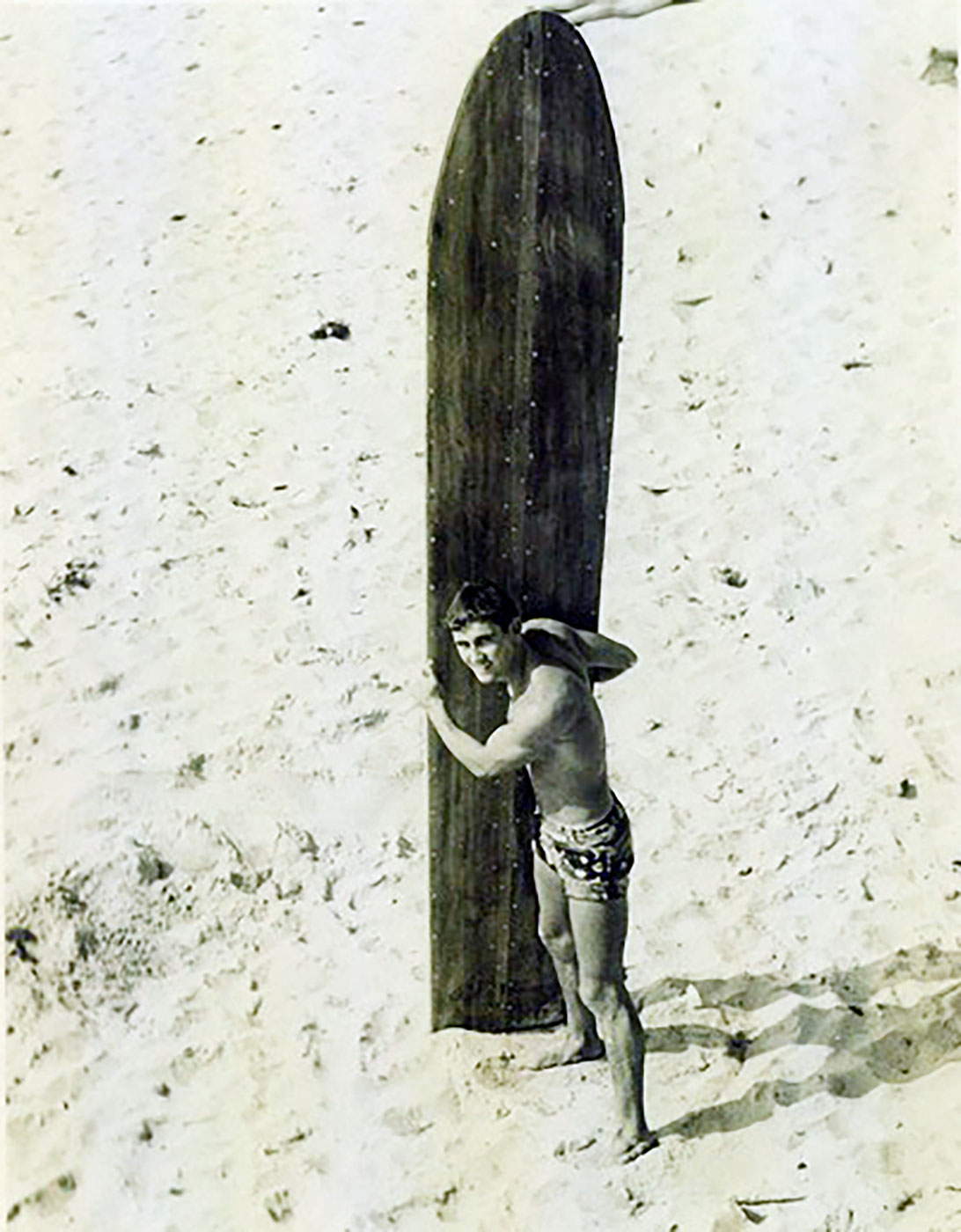 My first experience with board surfing was as a North School fifth grader in the summer of 1941. Bill Stidham, the 6’6” giant of a lifeguard at 24th Street, headed our group, The Hermosa Beach Patrol. He showed us all the ins and outs of riptides, including surf rescue techniques that would one day save not only my life, but countless others I would pull from dangerous rips as a Los Angeles County lifeguard.

In 1942 I bought my first board, a Kook Box. The hollow plywood-covered paddleboard had a pointed tail cut off at 8’6” and cost $14.00. This board accompanied me on my first trip with Larry Gray and our patrol group to San Onofre.

From the beginning, high school and surfing were not a good mix for me. Surf came first, always. I stashed my board at either Larry Gray’s house or in Happy Jacobs’ garage. I ditched school constantly that year to go surfing with Dale Velzy. Tom Rice would pick up me and Dale in his Model A Hot Rod and we would surf the Malga Cove. I was hooked. Eventually, the school caught on and notified my parents. By then my Dad had had enough of my surfing. They packed me off to private boarding school, hoping a hiatus from Hermosa might discourage surfing and encourage scholarly pursuits. In a way, it worked. While I admit to hitch-hiking back home to surf on occasion, I did turn my grades around. The following year I returned to Redondo High.

In the summer of 1945, I joined the wartime lifeguards. Many of the older guys had gone off to war, either to the Coast Guard or UDT teams, now the Navy Seals. The town needed replacements. Consequently, the “older boys” were recruited. That summer I juggled my time between surfing and lifeguarding. The money I saved up from lifeguarding allowed me to buy my first plank. In 1946, Jim Bailey, one of the all-time veteran surfers, sold me one of his boards, an 11’6” 120-pound solid plank.

That year we surfed all the beach cities, the Cove, San Onofre and La Jolla. By then I was well-traveled and well-acquainted with the surf culture. My dad let me borrow his 1940 red Ford Woodie. We loaded four or five guys and their boards into it and surfed for days.

When the war ended, the Hermosa Beach Surfing Club started up again in 1946. The draft board moved out of the old club room on the pier. That summer at sixteen years old, I received a big honor. I was inducted into the prestigious Hermosa Beach Surf Club. Three of us made the cut that year – Dale Velzy, Barney Briggs, and me, Pat O’Connor. Barney Briggs and I were the youngest members ever to have been selected.

An eventful year for me was 1947. That January I’d graduated from Redondo High School and immediately enrolled in classes at the University of Southern California (USC). I also signed up for water polo. In April, I reported for permanent lifeguard service for Los Angeles County and worked 14th Street. And that June I was scheduled to participate in Redondo High’s spring graduation.

Instinctively, I’ve always known that the ocean and my surfing buddies were my true teachers; it was they who prepared me for life’s challenges. I value my form education. But underneath it all, I am first a surfer. Never was this more evident than on the evening of my graduation.

To make our 5:00 pm graduation, Bill Stidham, the lieutenant, scheduled me to work the early shift. The plan was to finish my shift at 4 p.m., run home to shower and change, and get to the Redondo Sea Hawk Bowl in time to graduate. On that particular day, however, riptides blew up, and I spent all day long in the water making rescues. When Bill asked me to work extra time, I did so willingly. He knew about graduation and at 4:40 he okay-ed me to leave. With 15 minutes to spare, off I went – barefooted and sopping wet in lifeguard trunks.

As I drove into the stadium, I could hear the processional blasting through the loudspeakers. Parking was impossible, so I ditched my car somewhere and ran towards the stadium. By now the class had marched across the field. Frantic, I threw on my cap and gown and tore across the grass. As I neared the packed grandstand, a freak gust caught my poorly fastened gown, lifting it. The black drape flew open and behind like a super-hero’s cape. My one stitch of clothing – a soaked pair of red trunks plastered to my body- glistened beneath the bright stadium lighting. The entire stadium erupted with laughter. My parents and the faculty, however, were livid.

But it all worked out in the end. I’d saved the drowning victims; the following morning the headlines in the newspapers saved me. We lifeguards had made three hundred water rescues in Hermosa, setting a new water rescue record.

My special thanks to the City of Hermosa Beach for its efforts to help the surfing club and surfers like me to believe in ourselves. We won many events with hard work, discipline, and a winning, positive attitude. Those early days were formative ones for me. I learned if you make a mistake in surfing, you take a wipeout on the way. The same principle applies in life. Many give up, go home. But if you’re a surfer from Hermosa, you go back out, catch the next wave, and blow it away like the third force – you conquer, you achieve, you win.

Thank you Hermosa. Thank you surfing.