Let’s Boogie! Tom Morey and the Evolution of the Boogie Board

Catching waves on a board while lying on one’s belly is one of the oldest forms of surf-craft riding, dating far back in Polynesian and other cultures.

Then, in the early 1970s the modern bodyboard was launched — a soft, flexible piece of foam that offered a path to limitless fun in the ocean. It ultimately became known as the Morey Boogie.

“This is where it all began, Tom holding the first Bodyboard made in 1971 photo Scott Winer.”

The boogie board is the brainchild of restless genius Tom Morey, who, although an excellent stand-up surfer, kept looking for new ways to catch waves. A mathematician and engineer, Morey was taken with the idea of a small, lightweight craft while he was living in Kona, Hawaii in the early 1970s. 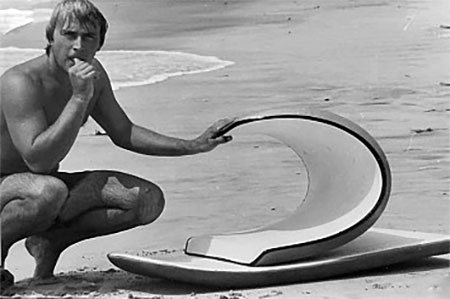 “I had no money and the surf was good right off the front yard. I had a leftover piece of polyethylene foam in the garage and I cut out a four-and-a-half board with an electric carving knife. Then I used my wife’s iron and ironed the foam (to seal it) with a copy of the Honolulu Advertiser newspaper. The print from the newspaper transferred to the board, and that’s how I remember the date – July 7, 1971.”

He took it out to the surf on the island of Hawaii and was pleased with the result. “I could actually feel the wave through the board,” he said later. “On a surfboard, you’re not feeling every nuance on the wave, but with my creation, I could feel everything. I was thinking: ‘it turns, it’s durable, it can be made cheaply, it’s lightweight, it’s safe.’” 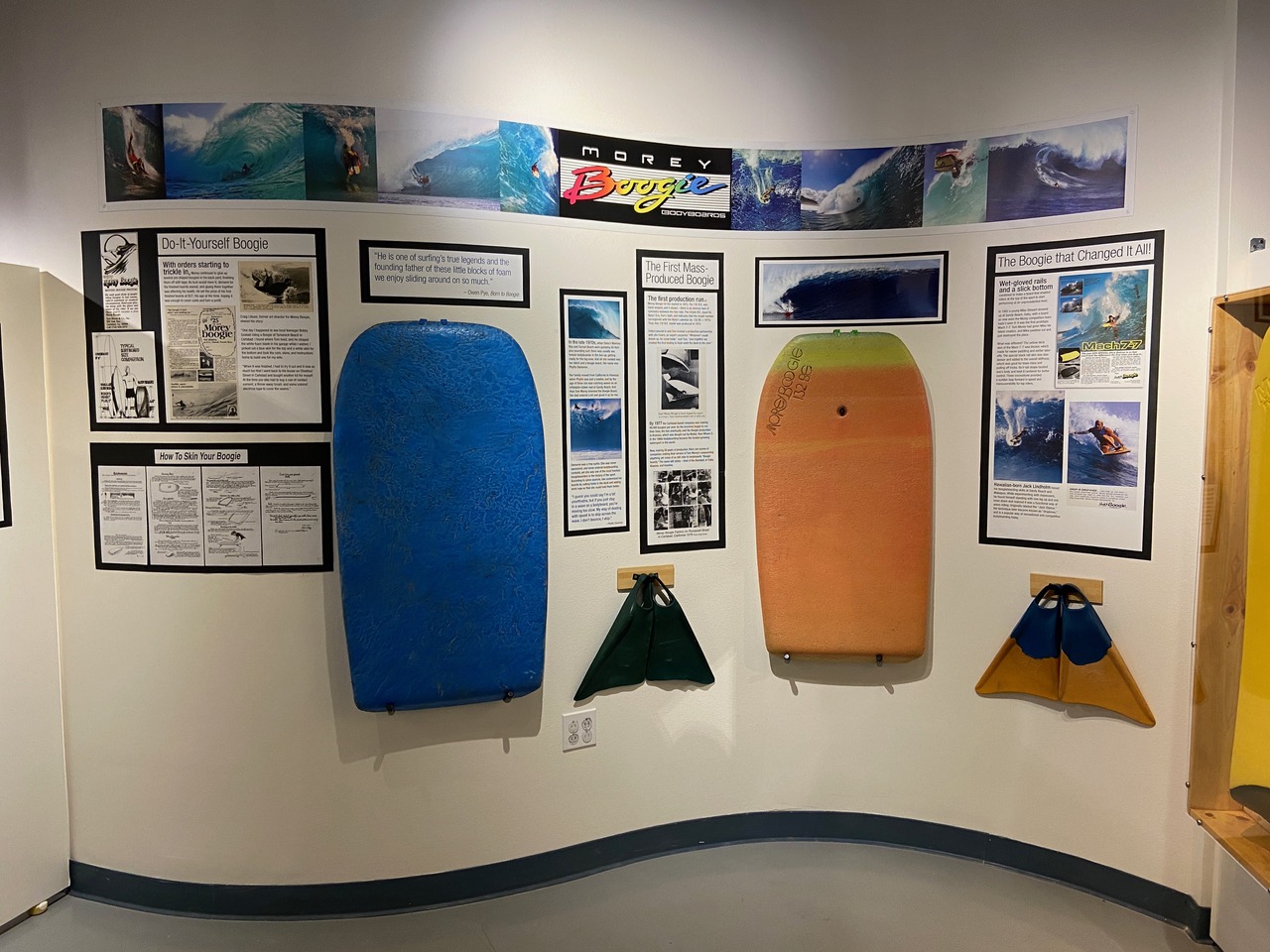 Put Your Body on a Boogie

Morey’s idea was to develop a Do-it-Yourself kit so that consumers could assemble their new dream vehicle in the comfort of their homes, IKEA-style.

The booklet “How to Skin Your Boogie” came with the kit, which cost $25, and included two pieces of foam that had to be glued together, and top and bottom “skins.” Tom persuaded Surfer magazine to let him place an ad on credit. The orders started with a tickle, and soon turned into a flood.

With the unexpected success of the kit sales, Morey realized he had to raise capital to get things rolling. After several dead ends, Larry Gordon from Gordon and Smith Surfboards offered him a deal.

The next challenge was to turn his new creation into a marketable product, and for that, he needed a name. His first choice was SNAKE, an acronym for Side, Navel, Arm, Knee, and Elbow – the main body parts that were engaged in riding the new surf craft. But feedback from female employees at the G&S shop was negative: “Ewww – yuck! I don’t like snakes.”

It wasn’t long before Tom, a professional jazz musician, settled on The Morey Boogie, after a type of swing music popular before WWII. “Boogie swung, and it had a wiggle and a jiggle to it,” said Tom. “The name fit perfectly.”

If Tom Morey is known as the Father of Bodyboarding, then Patti Serrano is the sport’s mother. Hired by Tom in 1974, Patti tried a series of positions in the small company until she found her niche. Said Patti, “It was Tom’s goal that every family have three Boogies in their garage, and I wanted to work towards that.”

In 1977 she began promoting local Boogie contests through surf shops. The first contest, held in early 1977 in Laguna Beach, was an immediate success, and scores of other organized events followed. “It was a lot of work,” Patti reflected, “but it was always so much fun.”

When giant toy company Kransco purchased Morey Boogie in 1979, the boards were suddenly in big department stores nationwide and Patti spent years traveling from coast to coast, organizing and promoting, getting people to the beach.

Her tireless dedication and commitment to “Put Your Body on a Boogie” literally built the business, and the sport, from the ground up. 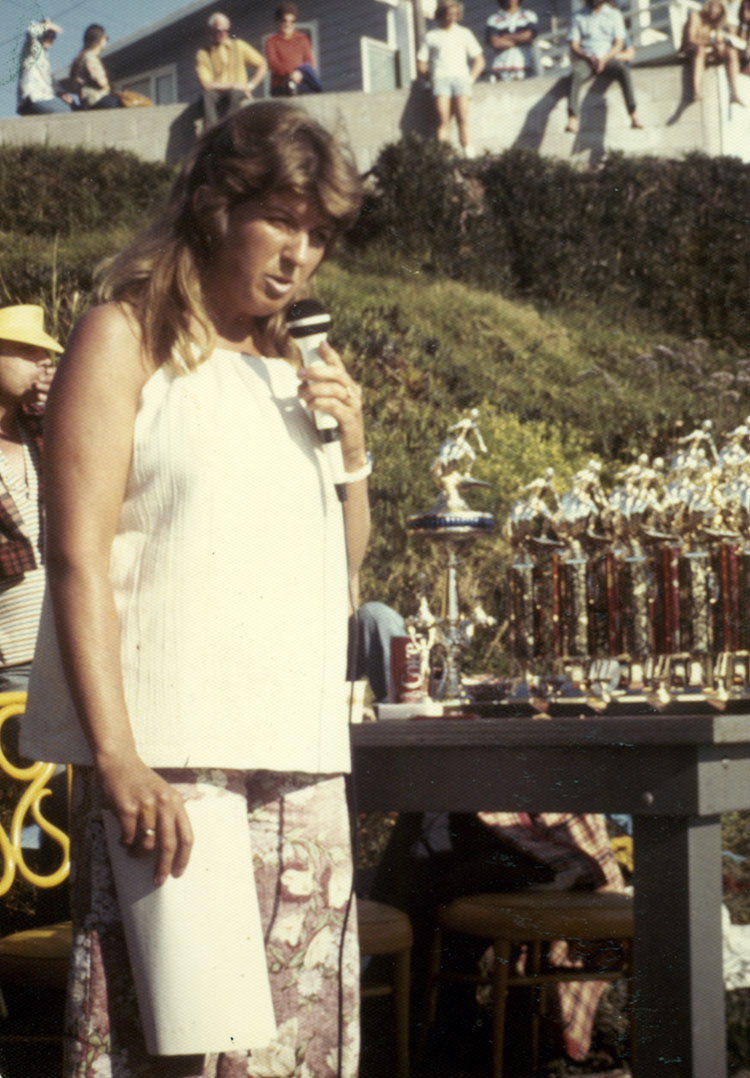 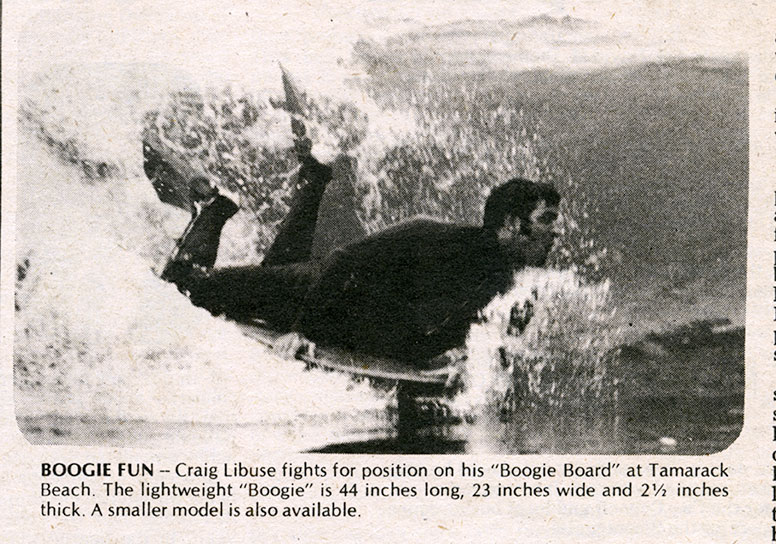 With orders starting to trickle in, Morey continued to glue up several pre-shaped boogies in his back yard, finishing them off with tape. As luck would have it, demand for the finished boards soared, and gluing them together was affecting his health. He set the price of his first finished boards at $37, his age at the time, hoping it was enough to cover costs and turn a profit.

“One day I happened to see local teenager Bobby Szabad riding a Boogie at Tamarack Beach in Carlsbad. I found where Tom lived, and he shaped the white foam blank in his garage while I waited. I picked out a blue skin for the top and a white skin for the bottom and took the core, skins, and instructions home to build one for my wife.

“When it was finished, I had to try it out and it was so much fun that I went back to his house on Chestnut Street in Carlsbad and bought another kit for myself. At the time you also had to buy a can of contact cement, a throw-away brush, and some colored electrical tape to cover the seams.”

How to Skin Your Boogie 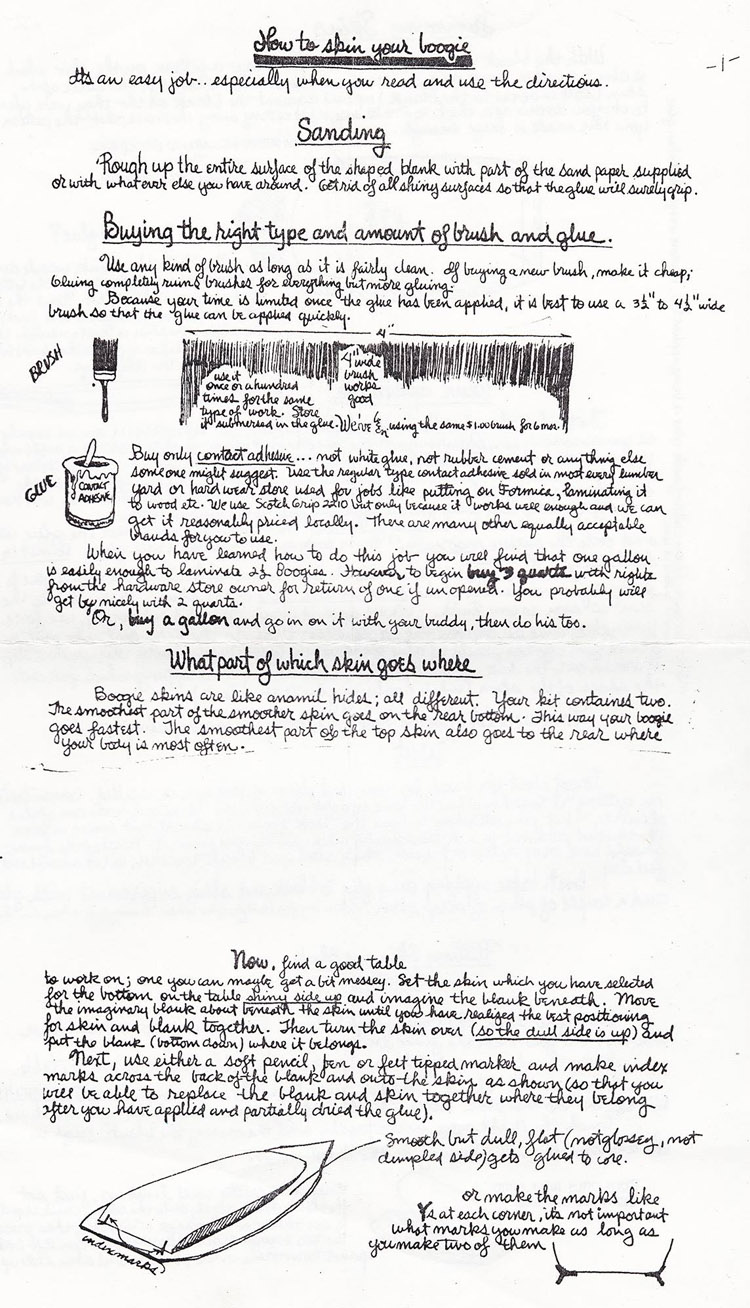 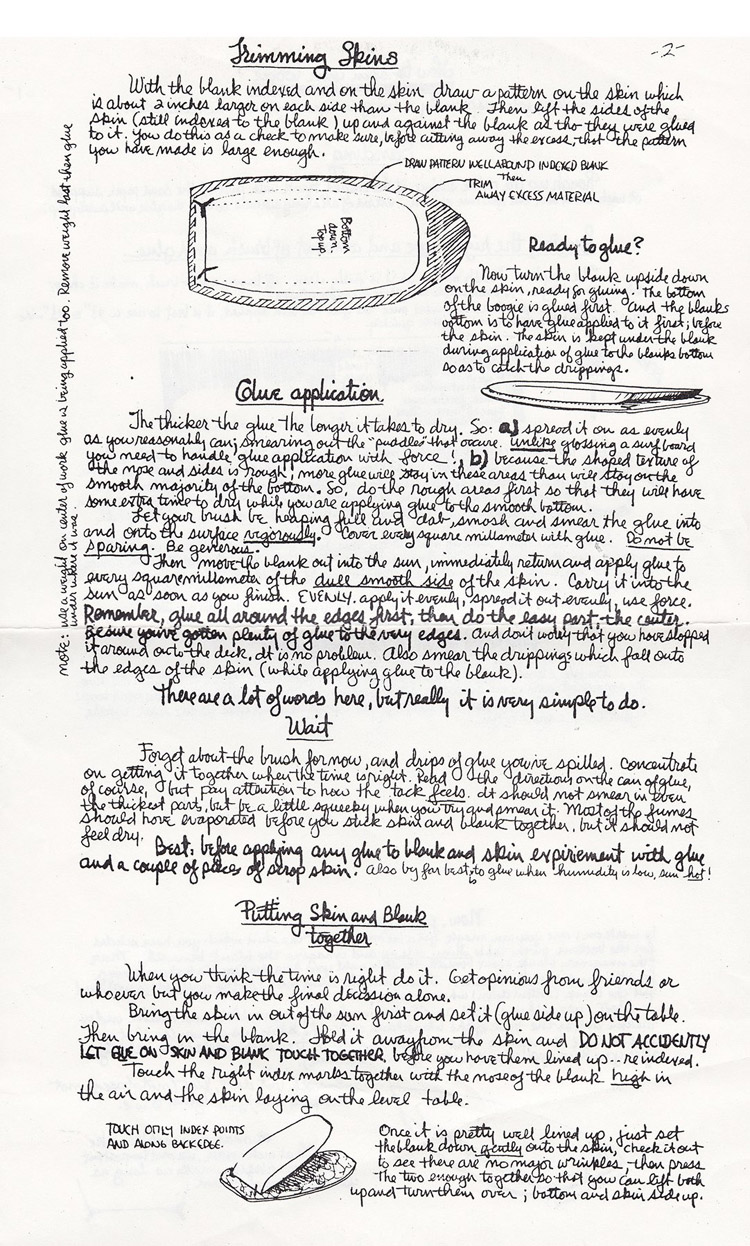 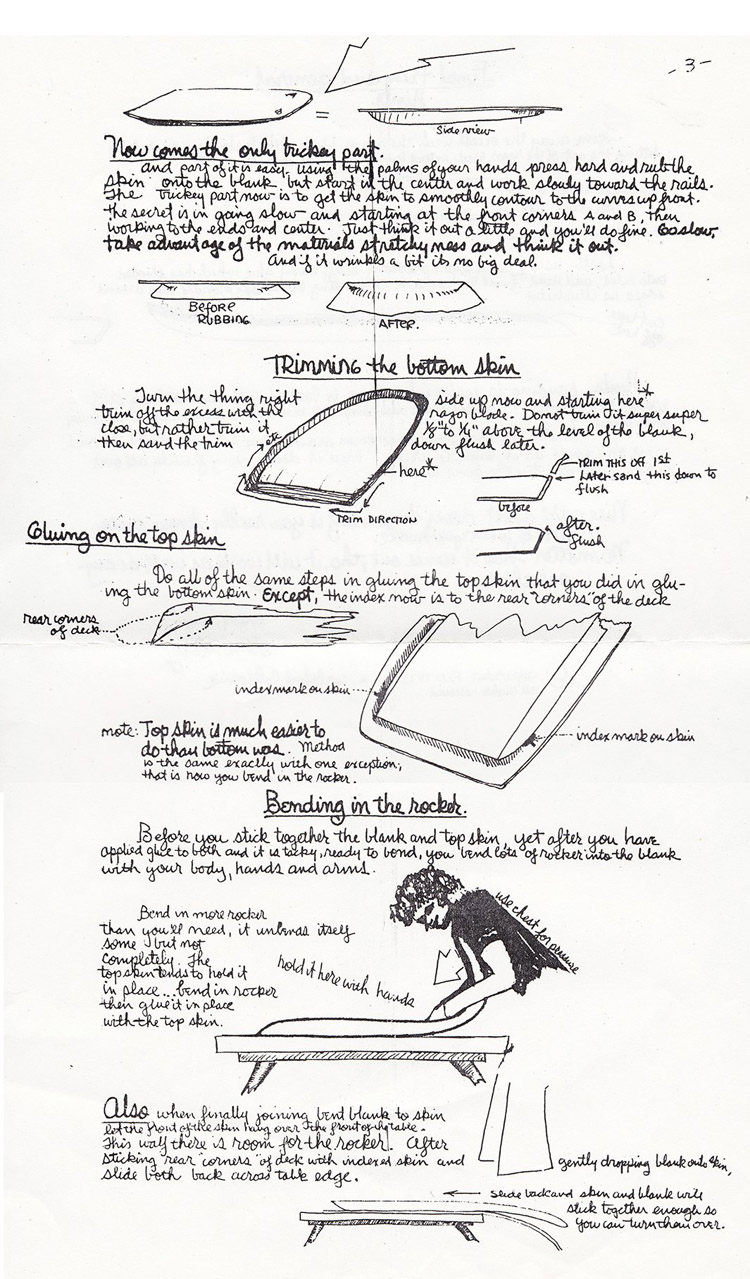 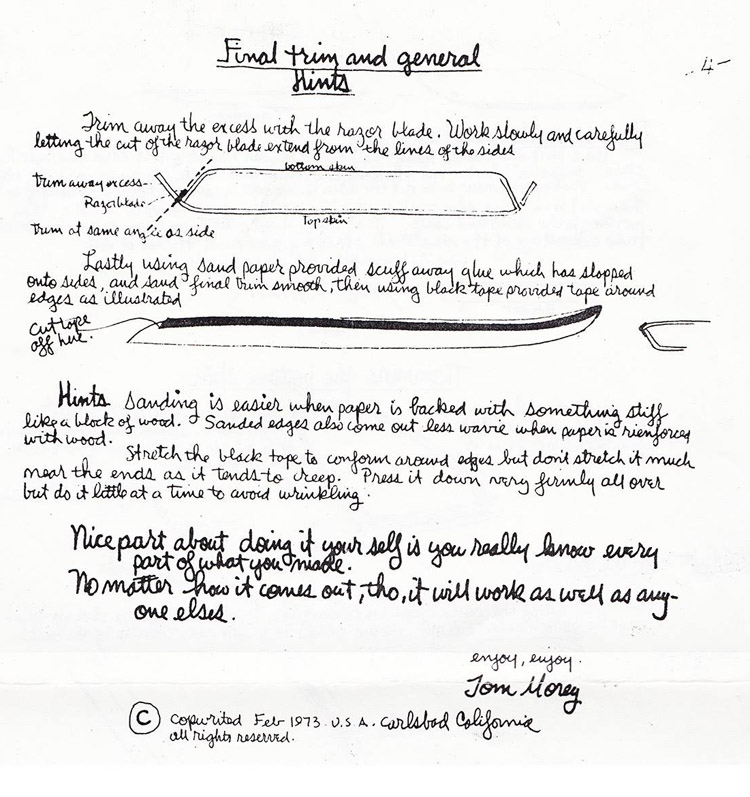 In the late 1970s, when Oahu’s Waimea Bay and Sunset Beach were pumping 20-foot-plus pounding surf, there was usually one female bodyboarder in the line-up, getting ready for the big ones. And all she needed was her bikini and a boogie board. Her name was Phyllis Dameron.

Her family moved from California to Honolulu when Phyllis was just a toddler, and by the age of three she was catching waves on an inflatable rubber mat at Sandy Beach. And then Tom Morey invented the Boogie Board. Her dad ordered a kit and glued it up for her. 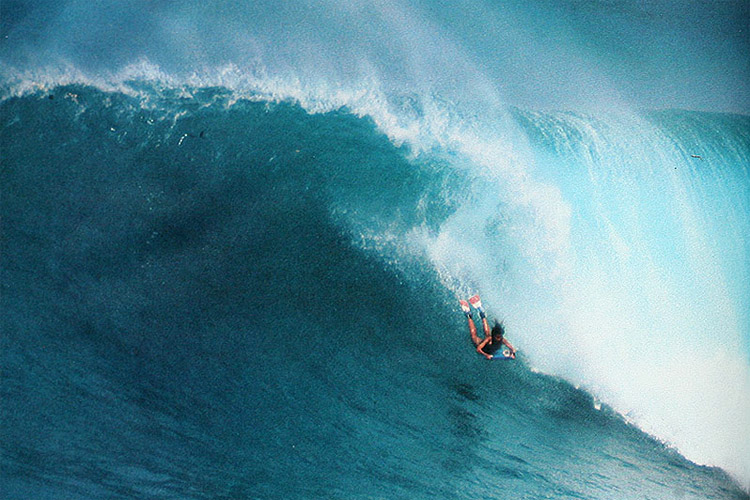 Dameron was a free surfer. She was never sponsored, and never entered bodyboarding contests, yet she was one of the most fearless boogieboarders in the history of the sport. According to some sources, she customized her boards by cutting holes in the deck and adding wrist rope so that she could hold them better.

“I guess you could say I’m a bit unorthodox, but if you just stay in a wave on a bodyboard, you’re moving too slow. My way of dealing with speed is to skip across the wave. I don’t bounce, I skip.”

The first production run of Morey Boogie hit the market in 1975. The 132 B.E. was hand-shaped, and it shows – there is an obvious lack of symmetry between the two rails. The initials B.E. stand for Baha’i Era, Tom’s faith, and indicates that the model number corresponds with the Baha’i calendar (ie. 132 BE = 1975). Thus, this 132 B.E. model was produced in 1975.

Orders poured in and Tom formed a productive partnership with Jim Faivre, an expert carpenter. “Whatever I could dream up, he could build,” said Tom, “and together we created the first tooling to heat-weld the deck to the core.”

By 1977 the Carlsbad-based company was making 80,000 boogies per year. As the business began to run their lives, the two eventually sold the Boogie production to Kransco, which was bought out by Mattel, then Wham-O. In the 1980s bodyboarding became the fastest-growing watersport in the world.

Now, nearing 50 years of production, there are scores of companies making their version of Tom Morey’s unassuming plaything, yet many of us still refer to bodyboards “Boogie boards.” The name still sticks – kind of like Band-Aid, or Coke, Kleenex, and Vaseline. 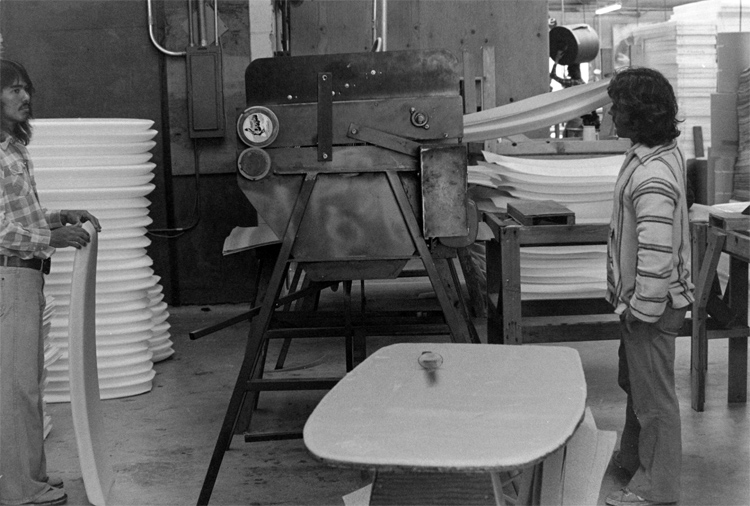 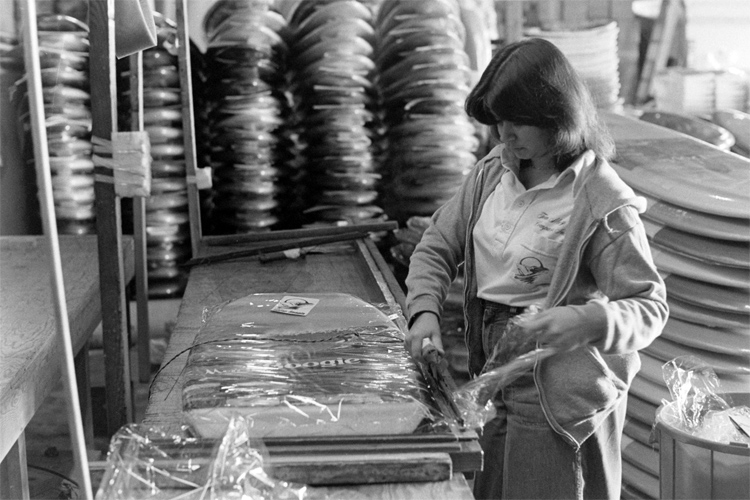 The Boogie that Changed It All!

Wet-gloved rails and a slick bottom combined to make a board that enabled riders at the top of the sport to start performing at an unprecedented level. 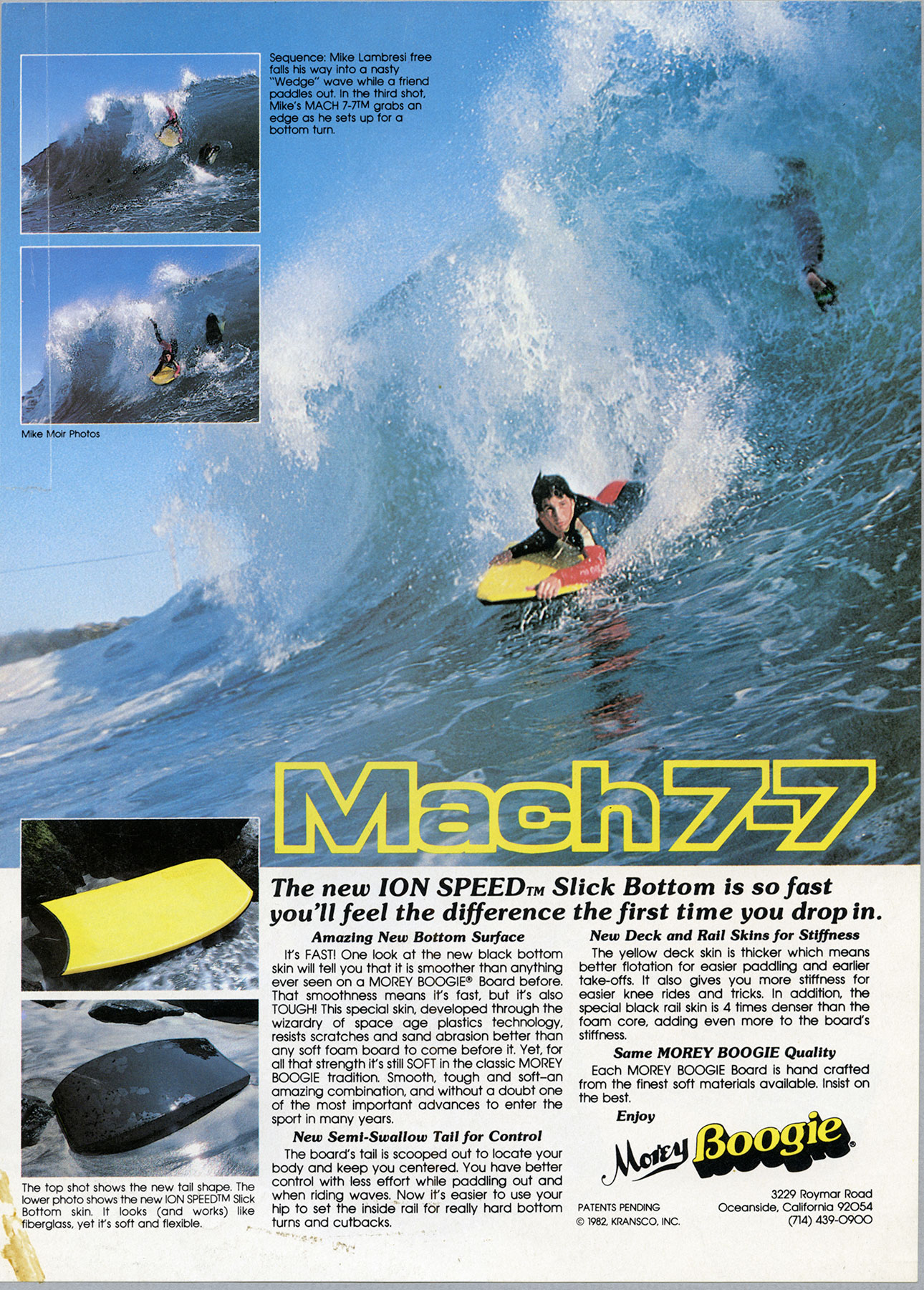 In 1982 a young Mike Stewart showed up at Sandy Beach, Oahu, with a board so new even the Morey competition team hadn’t seen it: it was the first prototype Mach 7-7. Tom Morey had given Mike his latest creation, and Mike paddled out and just destroyed the place.

What was different? The yellow deck skin of the Mach 7-7 was thicker, which made for easier paddling and earlier take-offs. The special black rail skin was also denser and added to the overall stiffness, which was good for knee-rides and pulling off tricks. Its V-tail shape located one’s body and kept it centered for better control. These innovations provided a sudden leap forward in speed and maneuverability for top riders.

Hawaiian-born Jack Lindholm honed his boogieboarding skills at Sandy Beach and Makapuu. While experimenting with maneuvers, he found himself standing with one leg up and one knee down and realized it was a functional way of wave-riding. Originally labeled the “Jack Stance,” the technique later became known as “dropknee,” and is a popular way of recreational and competitive bodyboarding today. 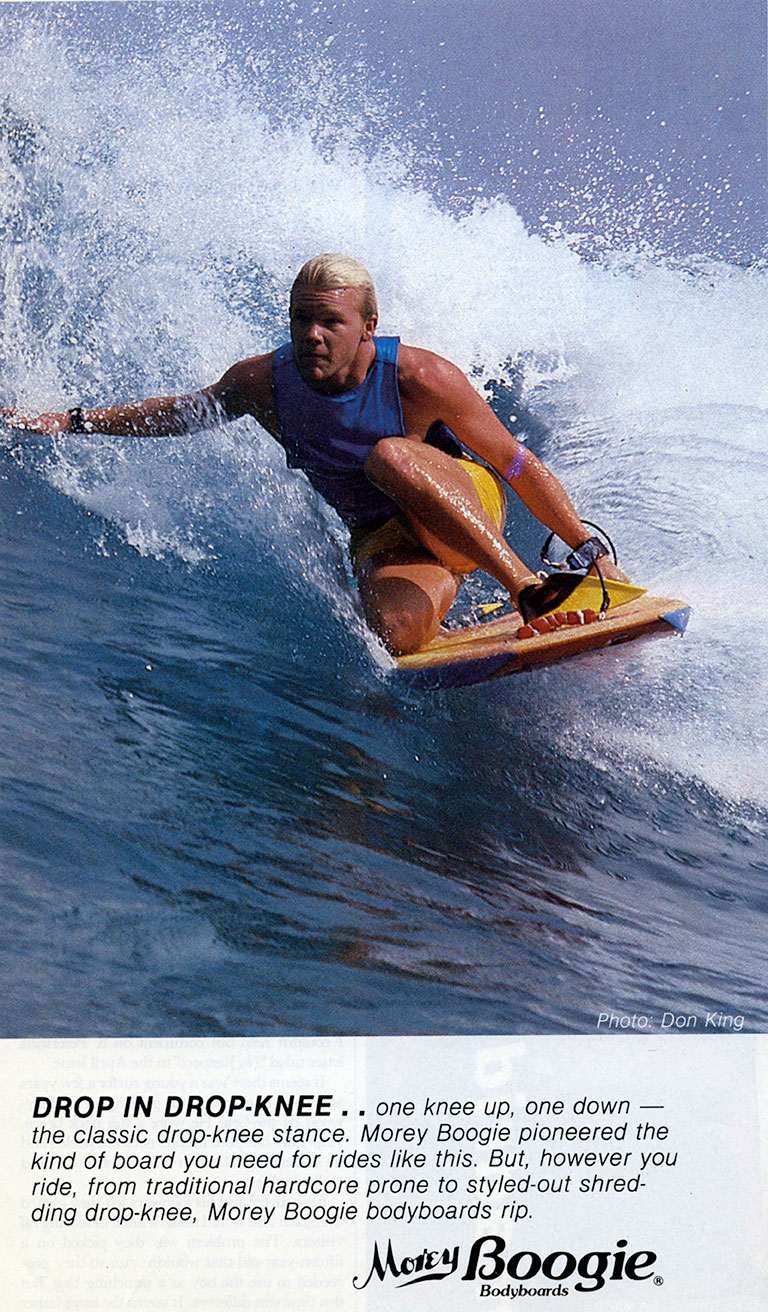 At times, bodyboarders are demeaned as “spongers” by stand-up surfers, but, according to sports journalist Bruce Jenkins, “Mike Stewart’s performances have established him as one of the best surfers in the world, period.”

Born on Oahu in 1963, Mike got his first Morey Boogie kit board at the age of 10 – and rode it for three years until it was completely waterlogged. “No matter where I squeezed it water would squirt out of the holes. It must have weighed 20 pounds.” 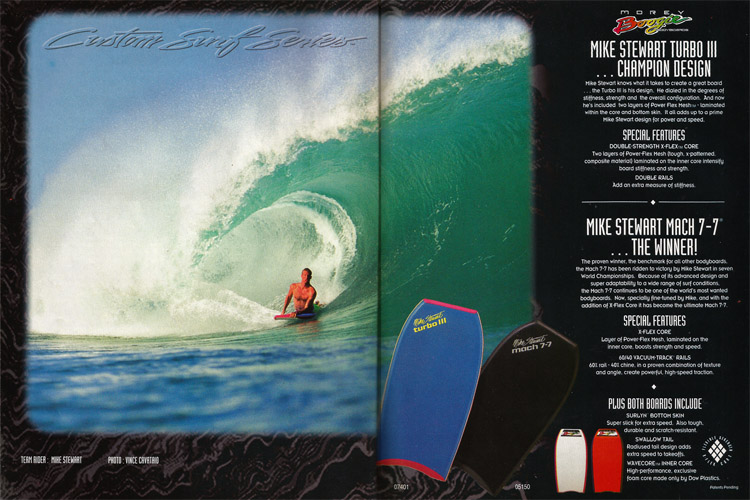 Shortly after his family moved to the big island of Hawaii, the tow-haired youngster happened to meet his idol Tom Morey out in the water, a chance encounter that proved golden for both of them.

“He had one of my older Boogies, but he was just catching everything,” Tom noted. “I needed a clean-up person in my shop, so I offered him a job.” It was the beginning of a very special relationship.

Riding the latest Boogie craft, Stewart developed a progressive new set of maneuvers, including the aerial 360. He remained in the prone position, stringing together complex moves and learned how to ride deeper in the tube than anybody.

His natural talent and determination, as well as a willingness to learn about materials and experimentation, have secured his legacy.

The display was made possible thanks to the efforts of: