The Shaping of a Surfing Legend

by Jeff Duclos, CSM Board Member

It can be said that something becomes “magical” by its effect and the resulting charmed condition it imbues upon the beholder.

The term has often been applied to describing certain surfboards. When a surfer acquires a surfboard that stands apart from all others they have owned, they often refer to it as their “magic board,” though on dry land, it might look no different than other boards. To see the magic, you must have the right rider. Then, add water.

But first, you must start with the surfboard’s creator. All advances in surfing style and performance starts in the shaping room. You could say that the effect the end-product produces is simply the result of innovation or design, but what of the role of the artisan creating it by hand? Is there something more they bring to it? Something extra that certain craftsmen can transfer to the craft they are creating.

Donald Takayama was that kind of shaper and destined to become a maker of such magic.

The fifth of seven children of a native Hawaiian mother and Japanese father, Donald Takayama was born on the island of Oahu on November 16, 1943.
He left this world all too early on October 22, 2012.

Through six decades of board-building, he leaves behind a legacy of designing surfboards that not only accommodate style and function but advance it.

A vessel that takes its rider to places that transcend all expectations.

”A surfboard is a personal thing. When a surfer finds one that feels perfect, it’s magic.

A message posted on the World Surfing League website 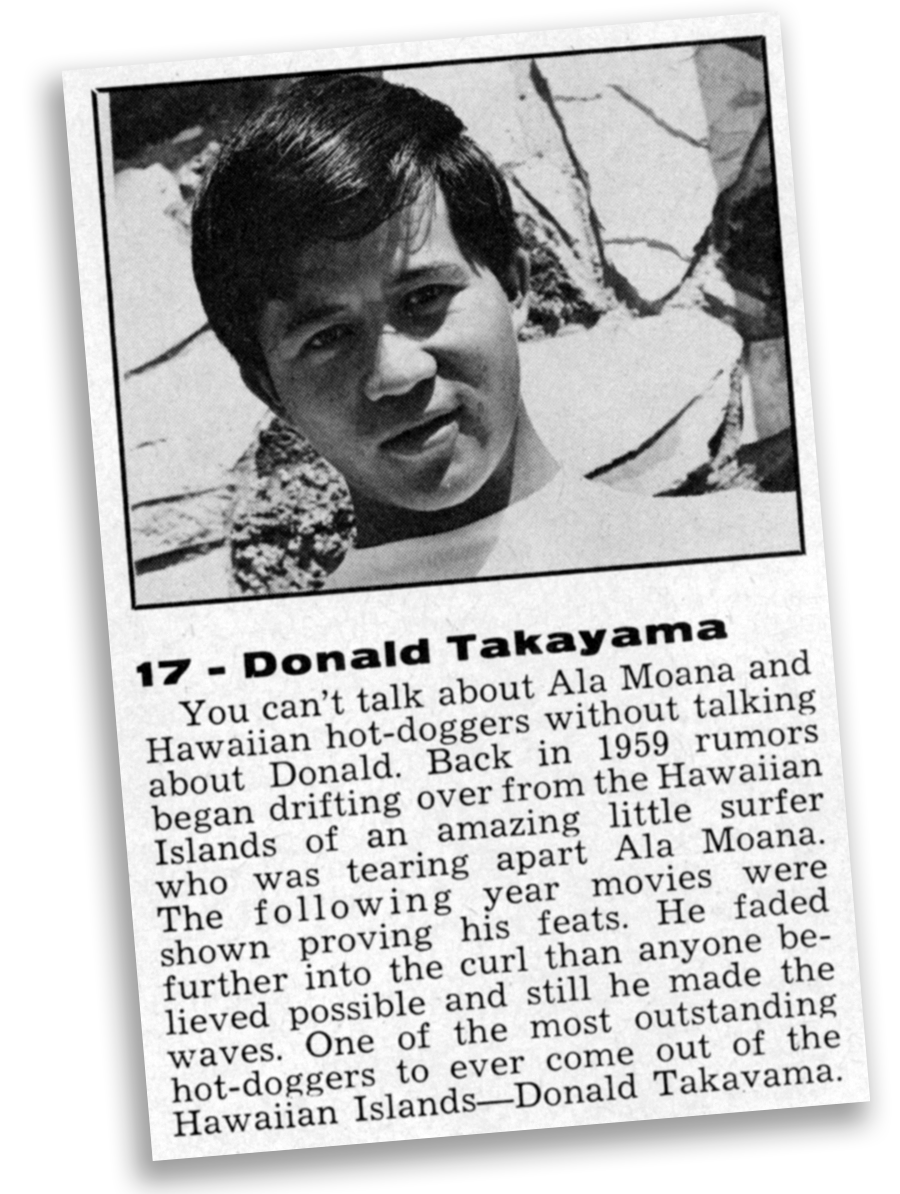 In eulogizing his hero, protégé World Longboard Champion Joel Tudor said that “watching him shape a surfboard is one of the most painfully beautiful things you’ll ever see.”

In reviewing one of the more than 60 surfboard designs he would create over the years, Longboard magazine pronounced it as “one of the most functional and aesthetically appealing boards ever made.”

Of his innate sense of design, older brother Richard simply put it this way: “He can tell what a surfboard can do.”

As a surfer he was equally accomplished and undeniably captivating; as he cast his spell upon the waves with lightening quickness, carving moves and nose rides that seemed to last forever. On the beach, his personality radiated the spirit of aloha.

Though small in stature, he was a towering presence wherever he went—a journey that would place him at the crest of advancing waves of transition in surfing that both defined his life’s direction and fostered his legacy, one that would live on as Donald Takayama-shaped surfboards are now one of the world’s most sought-after boards.

A path that led to Surfer Magazine naming him as one of the top surfers who changed the sport as well as induction into the International Surfboard Builder Hall of Fame.

”Donald. You wondered about your legacy. It is not made of balsa, redwood, or foam. Hanai-father, your legacy is made up of flesh and bone.